Argentina and Brazil are discussing plans for a common currency 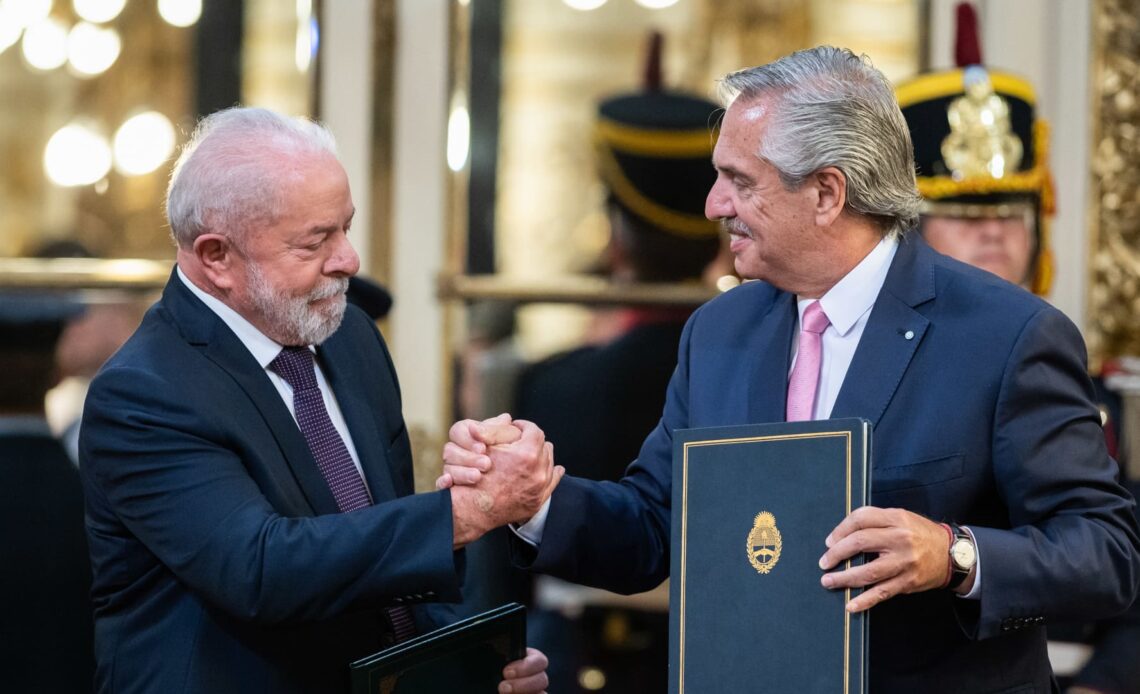 Argentina President Alberto Fernandez (R) and Brazil President Luiz Inacio Lula da Silva (L) greet each other after signing a series of agreements during a news conference in Buenos Aires.

Argentina and Brazil, the two largest economies in South America, are in early talks to create a common currency, as part of a coordinated bid to reduce reliance on the U.S. dollar.

But some analysts are highly skeptical, dismissing the proposal as “pie in the sky” because of the discrepancies between the two economies and the rapid shift of political winds in the region.

“Our finance ministers, each with his own economic team, can make us a proposal for foreign trade and transactions between the two countries that is done in a common currency,” Brazilian President Luiz Inacio Lula da Silva said Monday at a news conference in Buenos Aires, Argentina, according to Reuters.

Speaking on his first international visit since taking office, Lula said that the currency would initially be designed for trade and transactions between Brazil and Argentina. It could later be adopted by fellow members of Mercosur — South America’s major trade bloc.

Brazil’s Finance Minister Fernando Haddad said that the adoption of a common currency was not designed to replace the Brazilian real and the Argentine peso. He reportedly added that the currency does not yet have a name or deadline, nor would the countries seek a euro-style monetary unification.

“Three decades after inception, MERCOSUR has yet to deliver on its primary goal of trade integration for its four founding members,” Blanco told CNBC via email. “Developing and implementing a common South American currency is, therefore, pie in the sky.”

“Neither Argentina nor Brazil are enjoying the economic or political conditions necessary to embark on such a fundamental shift, which would take decades to be rolled out effectively,” Blanco said.

“We expect the ‘Sur’ to share the same destiny as the Peso Andino, which never got off the ground, or the Sucre, the digital payment currency used by Venezuela and ideologically aligned countries that has no more than symbolic value and has failed to dent the importance of the U.S. dollar in regional trade,” she added.