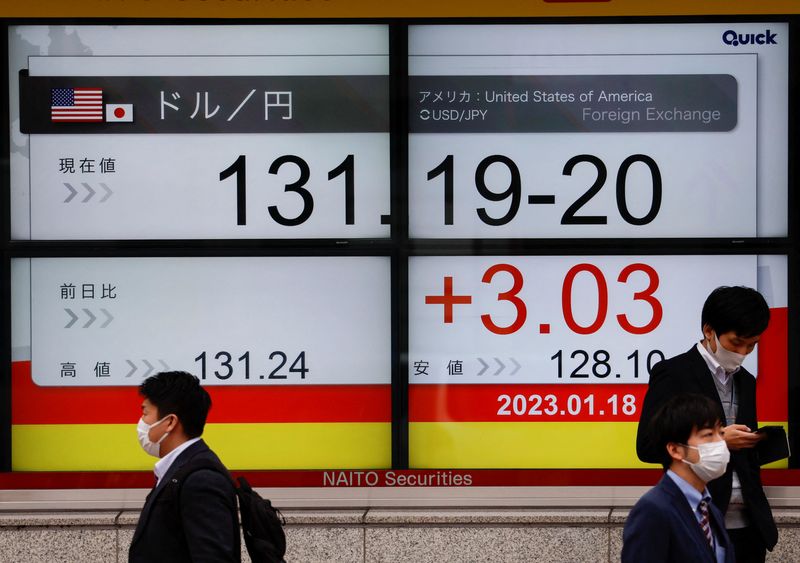 © Reuters. FILE PHOTO: Passersby walk past electric monitors displaying the exchange rate between the Japanese yen against the U.S. dollar outside a brokerage in Tokyo, Japan January 18, 2023. REUTERS/Issei Kato

The MSCI gauge has rallied 9% so far this year after slumping nearly 20% in 2022. Trading volume was depressed as Chinese and Taiwan markets were closed for holidays.

Globally, stocks have posted strong gains this year after a torrid 2022, based on expectations that inflation is close to peaking and the rise in U.S. interest rates will taper off. The dismantling of COVID controls in China and the re-opening of its borders have further boosted investor sentiment.

“It appears that markets are increasingly seduced by “Goldilocks” outcomes of tightening risks tamed yet recession risks tempered,” Mizuho analysts said in a note.

U.S. stock indexes closed mixed on Tuesday after companies warned of a tough year ahead along with some profit beats, while data showed U.S. business activity contracted for a troubling seventh straight month in January.

Microsoft Corp (NASDAQ:) rose in after-hours trade as its better-than-expected results showed some strength in the face of a weak economy.

Stronger-than-expected economic data in Europe has eased market worries of a sharp recession in the euro zone as energy prices decline, though interest rates are still seen creeping up.

The euro held near a nine-month peak against the dollar, as trades were encouraged by a rosier growth outlook for the euro zone against signs of a recession looming in the United States.

Australian equity markets slipped 0.2% on Wednesday after a shock surge in inflation to a 33-year high last quarter added to the case for the Reserve Bank of Australia to keep raising interest rates.