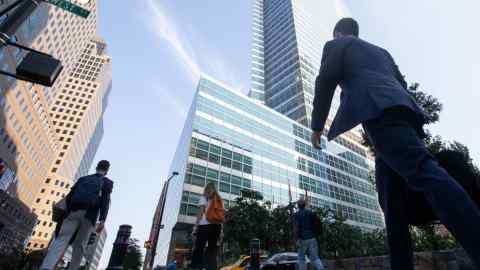 Barclays is set to choose former Credit Suisse dealmaker Cathal Deasy as co-head of global banking as the British lender continues to overhaul its investment banking unit, according to two people familiar with the hire.

Deasy’s future has been a subject of speculation since his abrupt departure from Credit Suisse in December, less than two months after he was promoted to co-head of the Swiss lender’s investment banking and capital markets business.

Deasy, 48, will work alongside Taylor Wright, who is currently co-head of global capital markets. They will replace JF Astier and John Miller.

In a memo confirming the moves, Barclays said they would be effective from March 27. The bank also said that Astier and Miller “are in active dialogue” about taking on “senior roles in the organisation”.

The appointments have been made by Barclays’ chief executive CS Venkatakrishnan as he considers succession at the top of the investment bank, headed by Paul Compton, who is nearing the end of his tenure, say the same people.

Deasy and Wright will report to Compton, who was given the role in late 2021 after former chief executive Jes Staley was forced to step down amid a regulatory probe into his relationship with the disgraced financier and sex offender Jeffrey Epstein. Deasy, who has mainly worked in London, will be based in New York, the biggest market for the investment bank.

The investment bank has been a bright spot for Barclays in the past few years, with revenue from M&A and trading surging during the coronavirus pandemic and pushing net profit to a record in 2021. Barclays managed to vault Credit Suisse to take the number six spot globally in investment banking league table rankings.

However, while the markets division continued to see high levels of activity and earnings in 2022, the advisory and capital markets unit has dropped off sharply as dealmaking volumes have plunged.

Deasy’s recruitment is part of a drive by Venkatakrishnan to bring in a new generation of leaders and galvanise performance from the advisory side of the investment bank, one of the people familiar with the decision said.

Other changes have been made to the top positions recently. In September, Barclays chose Tim Main to lead its investment bank in Europe as it plots an expansion in the healthcare and technology sectors in the region. It also hired Arif Vohra from Bank of America as co-head of the financial institutions group.