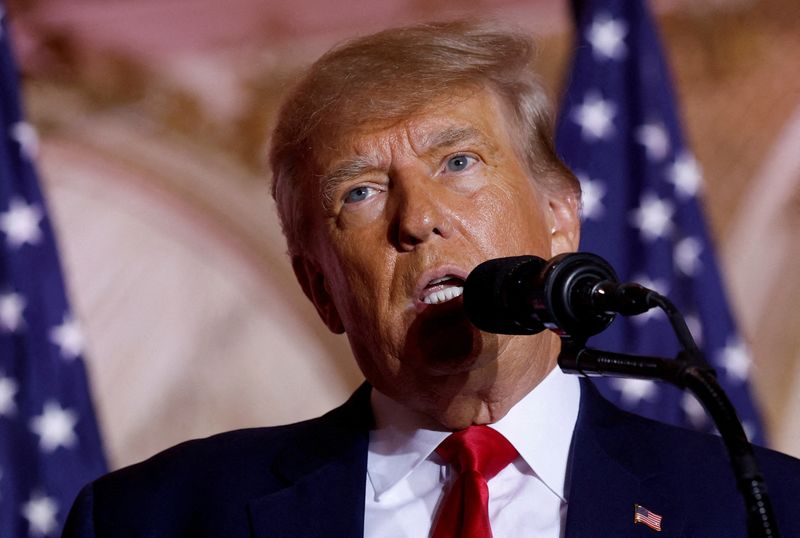 © Reuters. FILE PHOTO: Former U.S. President Donald Trump announces that he will once again run for U.S. president in the 2024 U.S. presidential election during an event at his Mar-a-Lago estate in Palm Beach, Florida, U.S. November 15, 2022. REUTERS/Jonathan Ernst/

(Reuters) -A Georgia prosecutor investigating Donald Trump’s efforts to overturn his defeat in the state’s 2020 presidential election told a judge on Tuesday that decisions on whether to bring criminal charges are “imminent.”

Fani Willis, the Fulton County district attorney, spoke at a hearing on whether to release a special grand jury’s report on its findings. She urged county Superior Court Judge Robert McBurney to keep the report sealed for now, warning that future defendants could argue that releasing the document publicly hurt their right to have a fair trial, among other rights.

“We are asking that the report not be released, because – you having seen that report – decisions are imminent,” Willis said.

It is not clear whether the special grand jury’s findings will lead to criminal charges against Trump or anyone else for election interference. Willis, an elected Democrat, will ultimately decide whether to make Trump the first former U.S. president to face criminal prosecution.

Members of the special grand jury voted to recommend the public release of their findings. Lawyers for a coalition of media organizations, including news networks and major newspapers, argued that the report should be published in part due to the overwhelming public interest in the case.

The panel was convened last year at Willis’ request to aid in her investigation of the Trump campaign’s actions following the 2020 election.

During his final weeks in the White House, Trump called Georgia Secretary of State Brad Raffensperger asking him to “find” more votes to overturn the Republican’s loss to Democrat Joe Biden in the 2020 election. Days later, a mob of Trump supporters stormed the U.S. Capitol in an unsuccessful attempt to reverse Biden’s victory.

Trump’s lawyers did not attend the hearing. In a statement on Monday, his Georgia-based legal team said the grand jury never subpoenaed Trump or asked him to appear voluntarily.

“We can assume that the grand jury did their job and looked at the facts and the law, as we have, and concluded there were no violations of the law by President Trump,” attorneys Drew Findling, Marissa Goldberg and Jennifer Little said.

The special grand jury had subpoena…