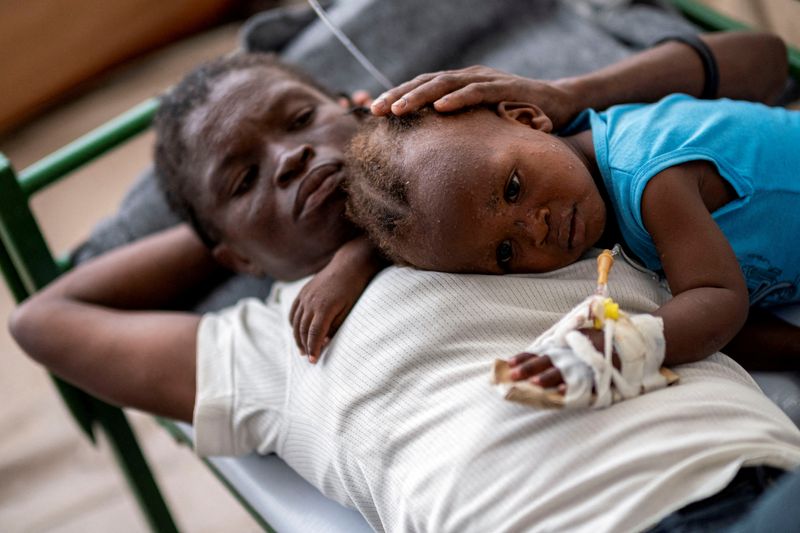 © Reuters. FILE PHOTO: Karina Joseph, 19, comforts her 2-year-old child Holanda Sineus as she receives treatment for cholera in a tent at a Doctors Without Borders hospital in Cite Soleil, a densely populated commune of Port-au-Prince, Haiti October 15, 2022. REUTER

MEXICO CITY (Reuters) – The humanitarian crises in Haiti and Venezuela that have subjected millions to hunger, violence and disease could worsen this year without more aid, the International Rescue Committee (IRC) said on Tuesday.

“The crises in Haiti and Venezuela are protracted challenges that are shaking the whole region but, as conflict escalates around the world, competing priorities are draining the attention they get,” the IRC’s Regional Vice President Julio Rank Wright said.

Haiti ranked No. 9 on the IRC’s 2023 emergency watchlist, below South Sudan and Burkina Faso and a notch above Ukraine.

The IRC estimated at least 5.2 million Haitians need humanitarian aid, with some 40% of the country having to skip meals.

Gangs have become de facto authorities in parts of Haiti’s capital Port-au-Prince since the 2021 assassination of President Jovenel Moise.

The violence has displaced over 155,000 Haitians within the country alone, the IRC said.

Cholera, meanwhile, has made a resurgence, with more than 22,000 suspected cases registered in January.

The IRC said it is preparing a response with local partners to combat cholera, provide health services and support survivors of gender-based violence.

Meanwhile in Venezuela, the IRC said health services are strained and medicine inaccessible for some 9.3 million people after years of sky-high inflation and political crises.

An estimated 7 million Venezuelans have fled in recent years.

The organization also expressed concern for Mexico, which received nearly 250,000 asylum requests over the last two years and continues to support migrants expelled from the United States.

Mexico is the only country in the region mentioned by the IRC Tuesday without a humanitarian response plan under U.N. guidelines, hampering humanitarian action and coordination.