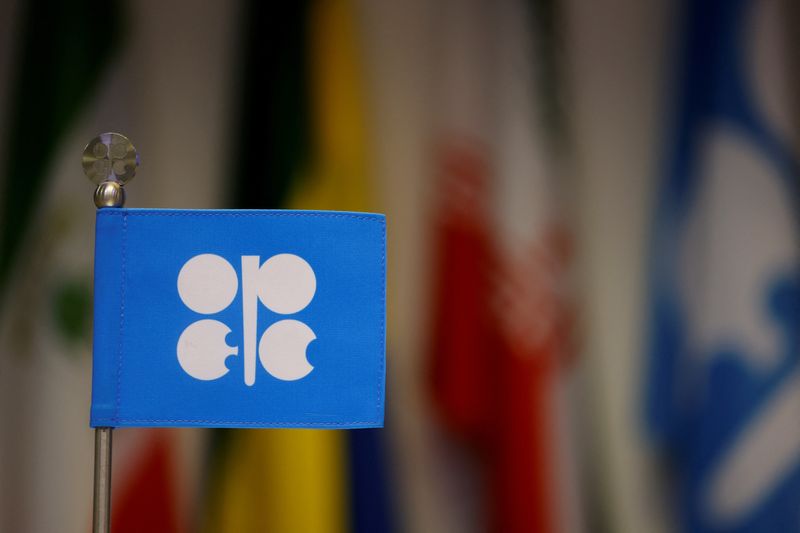 © Reuters. FILE PHOTO: An OPEC flag is seen on the day of OPEC+ meeting in Vienna in Vienna, Austria October 5, 2022. REUTERS/Lisa Leutner/File Photo

LONDON (Reuters) -An OPEC+ panel is likely to endorse the producer group’s current oil output policy when it meets next week, five OPEC+ sources said on Tuesday, as hopes that improved Chinese demand would drive an oil price rally were balanced by economic concerns.

Ministers from the Organization of the Petroleum Exporting Countries (OPEC) and allies led by Russia, known collectively as OPEC+, meet virtually on Feb. 1. The panel, called the Joint Ministerial Monitoring Committee (JMMC), can call for a full OPEC+ meeting if warranted.

The meeting comes as the price of oil has rallied in 2023 towards $90 a barrel on hopes Chinese demand will recover while the European Union and Group of Seven (G7) is set to broaden a price cap on Russian crude to refined products from Feb. 5.

Five OPEC+ sources told Reuters the JMMC would discuss the economic outlook and the scale of Chinese demand, and was unlikely to suggest tweaks to current policy. One said oil’s rebound in 2023 make any changes unlikely.

“We will certainly discuss China’s economy and inflation,” one of them said. “There are no expectations for this meeting. This will not be an OPEC+ meeting, but only a JMMC with no decisions or recommendations.”

“OPEC+ is by now somewhat comfortable that the difficult time of COVID’s impact is behind us and the geopolitical situation and China’s recovery are driving the volatility,” another of the OPEC+ sources said.

OPEC+ angered the United States and other Western nations in October when it decided to cut output by 2 million barrels per day (bpd) from November through 2023, instead of pumping more to lower fuel prices and help the global economy as the U.S. advised.

At their last meeting in December, the group left policy unchanged and their next full meeting is not scheduled until June.