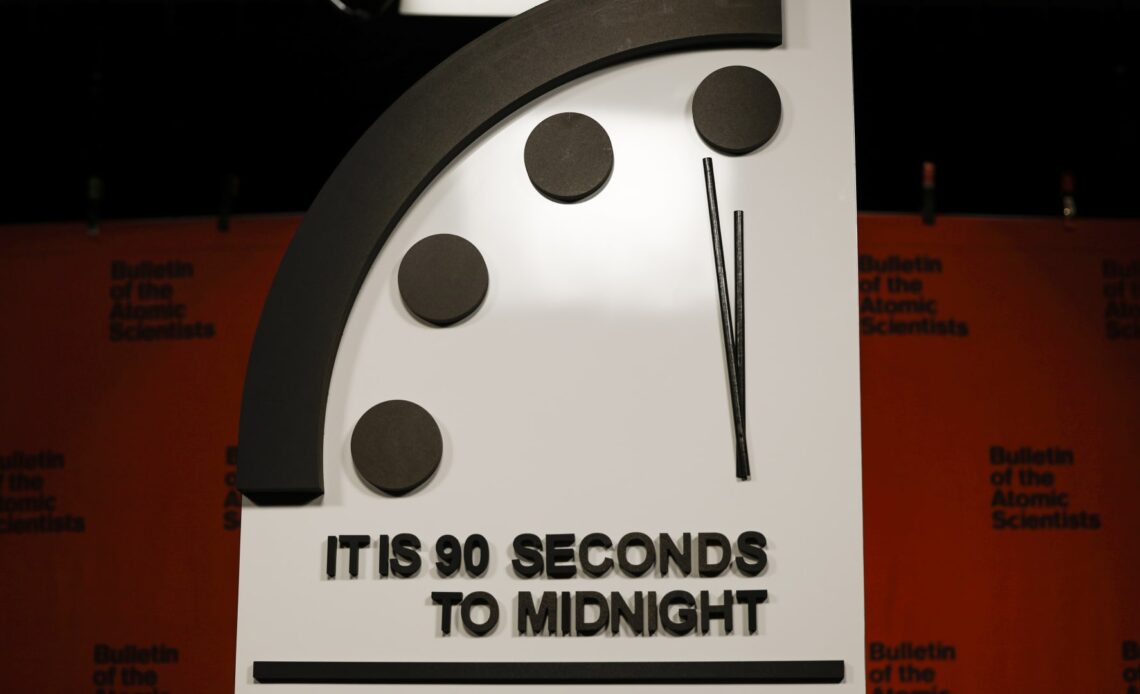 WASHINGTON — The Bulletin of the Atomic Scientists announced Tuesday that it has moved its metaphorical Doomsday Clock closer than ever to midnight, the hypothetical hour of Armageddon, reflecting experts’ assessment that humanity is confronting unprecedented threats to its existence.

The 2023 countdown time was set at “90 seconds to midnight,” the group’s leaders announced in a press conference at the National Press Club. This new time was 10 seconds closer to “doomsday” than it was set to a year ago. The group has been measuring real and existential threats to humankind, from climate change to the prospects of nuclear war, for more than 70 years.

“The point of the clock is to assess where humanity is, and whether we are safer or at greater risk,” said Dr. Rachel Bronson, president and chief executive of the bulletin. “And as we move the clock closer to midnight, we are sending a message that the situation is becoming more urgent.”

“Putin has given no indication that he’s willing to accept defeat,” said Dr. Steven Fetter, a professor at the University of Maryland and a nuclear-threat expert.

“But even if nuclear use is avoided in Ukraine, the war has challenged the nuclear order, the system of agreements and understandings that had been constructed over six decades to limit the dangers of nuclear weapons,” said Fetter.

The renewed global threat of nuclear war was compounded by the ongoing Covid pandemic, experts noted.

“The total number and diversity of infectious disease outbreaks has increased significantly over the last 40 years, with more than half caused by zoonotic diseases, that is, disease originating in animals and transmitted to humans,” she said, adding that there’s “no clear end in sight” to the pandemic.

The Bulletin of the Atomic Scientists was founded in 1945 by the late physicist and Nobel laureate Albert Einstein, as well as scientists who worked on the Manhattan Project to build the first atomic bomb. The first clock was unveiled in 1947.