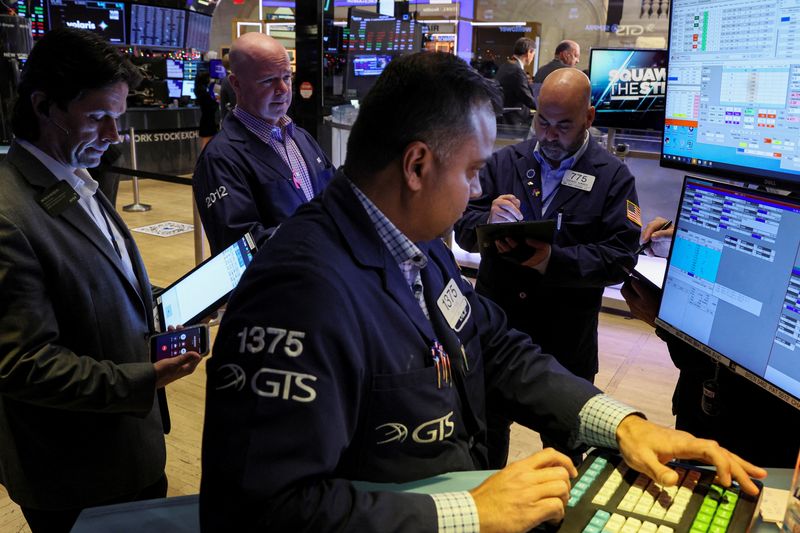 © Reuters. Traders work at the post where Carvana Co. is traded on the floor of the New York Stock Exchange (NYSE) in New York City, U.S., December 7, 2022. REUTERS/Brendan McDermid

(Reuters) -U.S. stock indexes were set to open lower on Tuesday as corporate reports from bellwethers including 3M, Johnson & Johnson (NYSE:) and GE pushed earnings season into high gear, while chip companies retreated after bouncing in the previous session.

In a week packed with high-profile earnings reports and key economic data, investors will now look to assess the impact of the Federal Reserve’s rate-hiking spree. The central bank is widely expected to raise rates by another quarter of a percentage point next week.

Johnson & Johnson shares fell 1.4% after the healthcare giant warned that its medical devices business would be hit by China’s COVID-19 surge in the first half of 2023, even as it beat estimates for fourth-quarter profit.

“It’s going to be earnings now that will direct the market’s direction and as far as today is concerned, we’re looking at a mixed session,” said Peter Cardillo, chief market economist at Spartan Capital Securities in New York.

After logging its biggest gain in over two months on Monday, Advanced Micro Devices (NASDAQ:) Inc slipped 2.6% as brokerage Bernstein downgraded the chipmaker to “market-perform” from “outperform” citing a bleak outlook for the PC market.

Other chipmakers including Nvidia (NASDAQ:) Corp, Intel Corp (NASDAQ:) and Broadcom (NASDAQ:) Inc fell between 0.4% and 1.3%.

Shares of Microsoft Corp (NASDAQ:), which is scheduled to report quarterly earnings after the bell, were flat.

Big Tech earnings could also determine whether renewed enthusiasm for growth stocks will be sustained.

“In the near-term, the answer seemingly lies with tech earnings … longer-term, if we do…