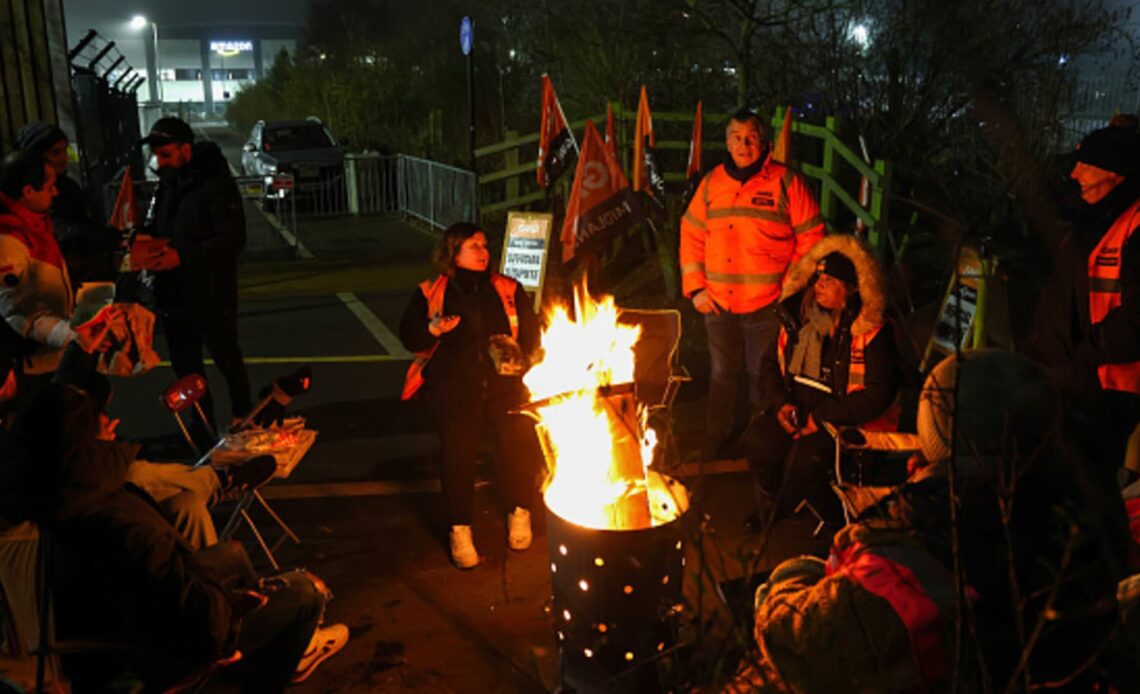 Amazon packages move on a conveyer belt at a fulfillment center in England.

Hundreds of Amazon workers are on strike in Britain. The walkout marks the first formal industrial action in the country for the U.S. tech giant.

The 24-hour strike action began Wednesday a minute after midnight. Strikers are expected to picket outside the company’s site in Coventry in central England throughout the day.

At 6 a.m. London time, workers were pictured camping by a bonfire and waving union flags outside the Coventry site near Birmingham airport, known as BHX4.

Striking workers gather around a fire pit on a picket line at the Amazon.com Inc. fulfilment centre in Coventry, UK, on Wednesday, Jan. 25, 2023.

One poster behind the workers had a slogan that said “Fight for £15,” and encouraged workers to join the GMB union. Another, which was bannered across a fence, read: “The wrong Amazon is burning.”

A striking worker attaches a banner that reads “The Wrong Amazon Is Burning” on a fence near a picket line at the Amazon fulfilment center in Coventry, U.K., on Wednesday, Jan. 25, 2023.

The GMB Union, which represents the workers involved, said it expects 300 employees out of a total 1,000 at the plant to turn up to the walkout.

Workers are planning to hold a larger scale demonstration from 4 p.m. to 8 p.m. London time.

Staff are unhappy with a pay increase of 50 pence (56 U.S. cents) per hour, equivalent to 5% and well below inflation. Amazon introduced the pay hike last summer. But warehouse workers say it fails to match the rising cost of living. They want the company to pay a minimum £15 an hour.

A striking worker holds a “GMB Midlands” union flag as workers queue to pass a picket line at an Amazon fulfilment center in Coventry, U.K., on Wednesday, Jan. 25, 2023.

A spokesperson for the tech giant told CNBC in a statement that the staff involved represent “only a fraction of 1% of our UK employees.” The spokesperson said that pay for Amazon’s U.K. warehouse workers has increased 29% since 2018, and pointed to a £500 one-time payment made out to staff to help with the cost-of-living crisis.

Wednesday’s action against the…