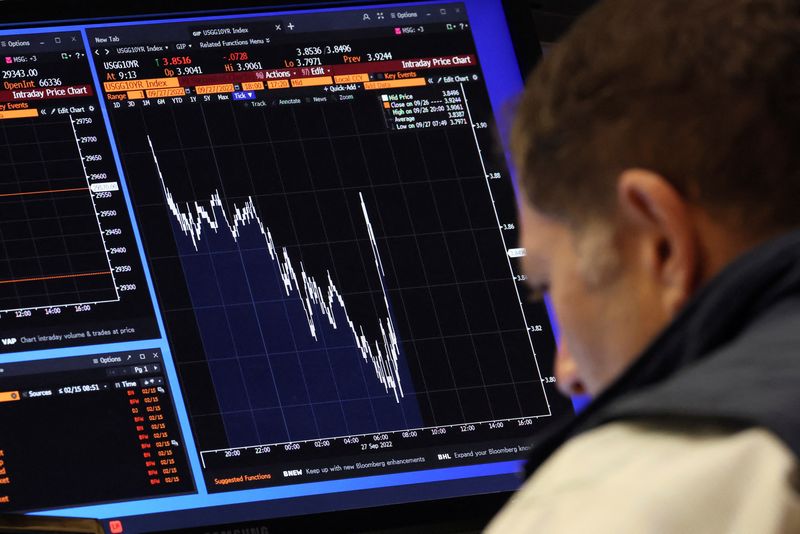 By Davide Barbuscia and Matt Tracy

(Reuters) – A New Year rally in U.S. corporate bonds has started to lose some momentum, as some investors become skeptical of recent optimism about a ‘Goldilocks’ economic scenario of slowing inflation against a backdrop of moderate growth.

Credit spreads for both investment-grade and high-yield bonds have been tightening in recent months, and more so this month, as lower inflation prints raised hopes of a pivot in the Federal Reserve’s current hawkish policy.

Seen as a measure of perceived risk compared to holding safer government bonds, spreads for investment grade bonds narrowed some 10 basis points so far in January and in total about 37 basis points since early October, while junk-rated debt spreads have come in 52 basis points and 116 basis points, respectively, in the same period.

But this tightening spree may be nearing an end, said analysts and investors.

“Credit spreads have rallied across the board since the beginning of the year despite heavy (new bond) issuance and are at multi-month tights. This puts the credit market at odds with economic forecasts and the rates market,” Barclays (LON:) strategists said in a recent note.

Behind the risk-on approach was optimism about the macroeconomic outlook: Easing inflation, accompanied by signs of a weakening but resilient economy, leading to a so-called soft landing where the Fed tames price pressures without pushing the economy into a recession.

But that theory is getting pushback from some investors, and price moves in recent days have started to reflect some caution. Spreads on investment grade bonds widened for the first time this year last week, though only marginally, and an index of credit default swaps – a derivative some investors use to either hedge their positions or to short credit – rose last week for investment grade debt.

Money markets bet the Fed will start cutting rates towards the end of the year, while Fed…