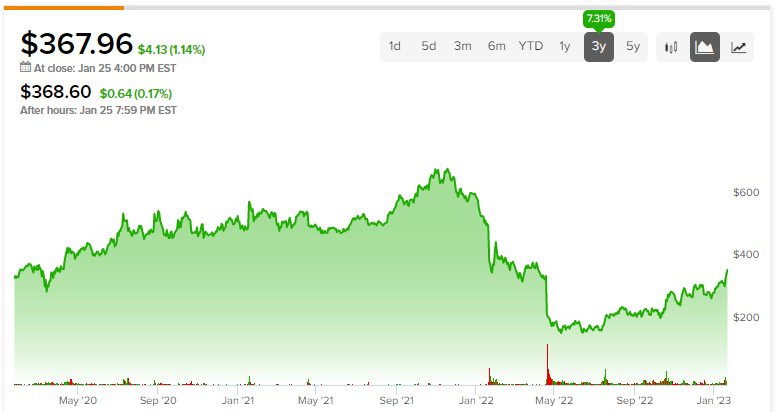 Shares of streaming giant Netflix (NASDAQ:NFLX) gained 8.46% last Friday following a so-so Q4 earnings report. NFLX missed analysts’ earnings estimates but met revenue expectations. Nevertheless, the growing competition continues to dilute its market share, evidenced by the deceleration in its bottom-line growth across its most profitable regions. Similarly, the race to develop the most attractive content library is as hot as ever, which continues to chomp away at the company’s cash reserves. Therefore, we are bearish on NFLX stock at this time.

Netflix experienced a startling decline in its market value near the end of 2021. The stock is down a remarkable 47% from its high as its investors plan for an uncertain future fraught with competition. Growth rates have normalized post-pandemic, and its operating metrics will continue to fluctuate over the next several quarters.

Perhaps the greatest challenge for the firm going forward is its capital-intensive business model. It’s incredibly challenging for Netflix to maintain its expansive content cycle amid the growing competition and its worrying liquidity position.

Despite the headwinds and shaky outlook ahead, NFLX stock trades at a forward P/E ratio of 31.9x, roughly 85% higher than the industry median. Given the lack of a huge competitive advantage, the stock is still trading at a nosebleed valuation.

Although Netflix missed analysts’ expectations for the fourth quarter, its management seemed undeterred, praising the firm’s performance. Netflix was upbeat about how the company’s revenue, operating profit, and membership growth exceeded its estimates by a relatively healthy margin. However, that says little about the company’s fourth-quarter showing.

For the full year, revenue growth came in at 6% while its operating profit margin shrunk 310 basis points, and per-share earnings fell 11%. Even though cash continues to flow positively, investors have reason to remain cautiously pessimistic currently.

It appears that Netflix is struggling to make substantial gains in its most profitable regions,…