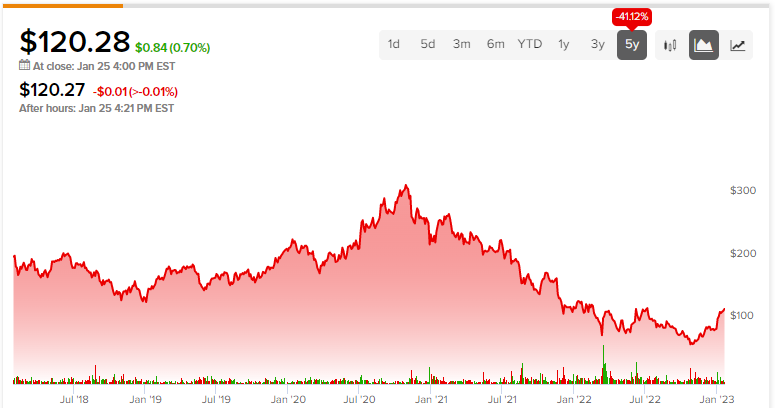 Chinese internet and e-commerce giant Alibaba (NYSE:BABA) has seen its stock rally from its multi-year low near $58 seen in October 2022 to $120 currently. BABA’s revival expectations laid down in the article I wrote a month ago came true. The stock is up over 30% since then. This is massive, especially compared to the S&P 500’s (SPX) gains of about 1% and the Hang Seng index’s 12% gain over the same period. While investors may think that they are too late to now buy the stock, that may not be entirely true. I believe that given the resurgence of the Chinese economy, BABA’s strong fundamentals, and its business growth potential, the stock will continue its rally.

Now, let’s look at BABA’s 5-year chart below. Despite the recent revival, BABA is far below its all-time high of ~$319 from October 2020.

2023 started on a high note for BABA and the Chinese tech sector following positive news from the Chinese government’s new financial policies that seek improved relations with their U.S. counterparts. Newly- appointed Chinese foreign minister Qin Gang stated that he hopes to see better relations with the U.S. in the future. In addition, Guo Shuqing, Chairman of China’s Banking and Insurance Regulatory Commission, said that the regulatory overhaul is nearing its end.

On top of that, BABA stock got an additional boost. Beijing authorities approved a capital raise of $1.5 billion for BABA’s financial technology company Ant Group.

Investors saw this as yet another reaffirmation of China’s easing regulatory crackdowns. For reference, BABA owns a third of Ant Group.

Ensuring that the Chinese government has a big piece of the BABA pie, last week, the government revealed that it will buy “golden shares” of many companies like BABA and Tencent Holdings (OTC:TCEHY). It also recently bought golden shares in BABA’s media and entertainment subsidiaries: Youku and UC web.

What are golden shares? Golden shares are special shares that allow the holders to have representation on the company’s Board of Directors. In addition, they also get veto rights and enjoy more power than the normal shareholders.

This can mean two things. First, the Chinese government is confident about the growth prospects of these stocks. Second, though the regulatory clampdown has ended, this is the government’s way of still holding significant power over…