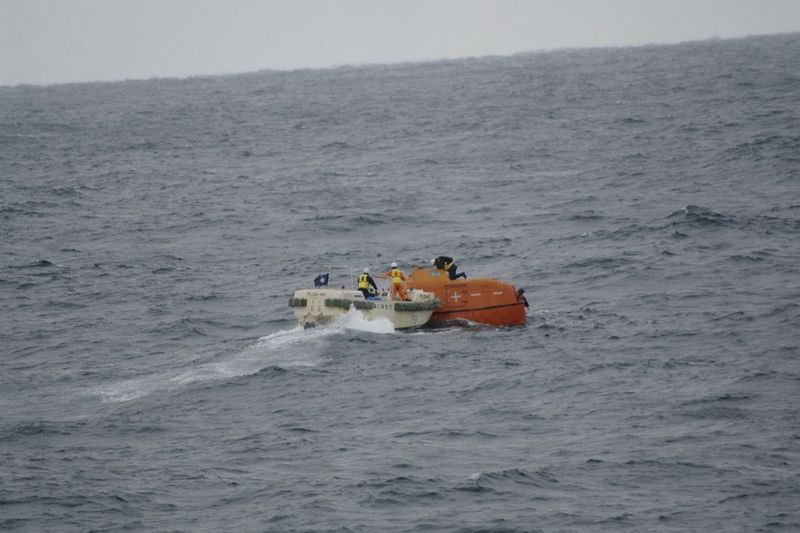 © Reuters. Japan Coast Guard crews check a life boat drifting at sea near the site of a cargo ship that sank off southwestern Japan in this handout image released on January 25, 2023. Courtesy of 7th Regional Coast Guard Headquarters – Japan Coast Guard/Handout via

TOKYO (Reuters) – Two people died and nine were missing after a cargo ship sank off southwestern Japan early on Wednesday amid fierce winter winds, the coast guard said, as it continued to search for survivors.

Six people who were rescued remained unconscious, while five had revived as of 8:30 p.m. local time (1130 GMT), the Japan Coast Guard said, partly citing information from its South Korean counterpart.

The 6,651-tonne Hong Kong-registered “Jintian” – which had 22 crew on board who were Chinese or Myanmar nationals according to media reports – issued a distress call late on Tuesday, the Japanese coast guard said.

The area where the ship sank is between Nagasaki and South Korea’s Jeju island, where hundreds of flights were cancelled on Tuesday because of harsh weather.

Media reports cited a person who had been on the ship as saying it had listed and took on water, and that all the crew had been transferred to lifeboats.

There was no immediate word on what caused the vessel to capsize. A coast guard spokesperson said winds were strong at the time. Media reports said the vessel was carrying lumber from Malaysia to Incheon, South Korea.

The coast guard is “seeking cooperation from the Self-Defence Forces, South Korean Coast Guard, and vessels sailing near the waters”, Matsuno told reporters.

Western parts of Japan were battered by winter storms that brought freezing, windy conditions on Tuesday.

A separate ship ran aground in heavy wind off the southern Japanese islands of Okinawa on Tuesday. Its 19 crew members from China were rescued, media reported.