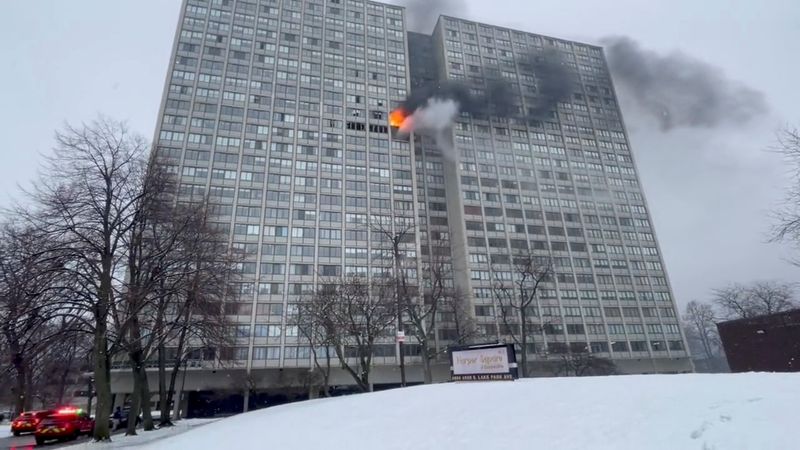 © Reuters. Fire rages in a high-rise apartment building on the South Side of Chicago, Illinois, U.S., January 25, 2023, in this still image obtained from a social media video. Chicago Fire Department/via REUTERS

CHICAGO (Reuters) – A fast-moving fire on Wednesday spread to nine floors of a high-rise apartment building on Chicago’s South Side, killing one person and injuring eight, including a firefighter, officials said.

The blaze began on the 15th floor of the Harper Square Cooperative about 10 a.m. (1600 GMT) and spread vertically, Chicago Fire Department officials said in a news briefing.

“It was a fast-moving fire vertically, and it was tough staying ahead of it,” Deputy Fire Commissioner Marc Ferman said.

One person died in the blaze and eight people were taken to hospitals with injuries, Fire Commissioner Annette Nance-Holt said. One firefighter was injured battling the blaze.

Before firefighters gained control of the blaze about 90 minutes after it began, flames were seen lapping the outside of the 50-year-old building as smoke billowed from the structure with winds clocked at 15 miles (24 km) an hour.

The 25-story, 360-unit apartment building has smoke detectors in the hallways, but it was unclear whether it has a sprinkler system, fire officials said.