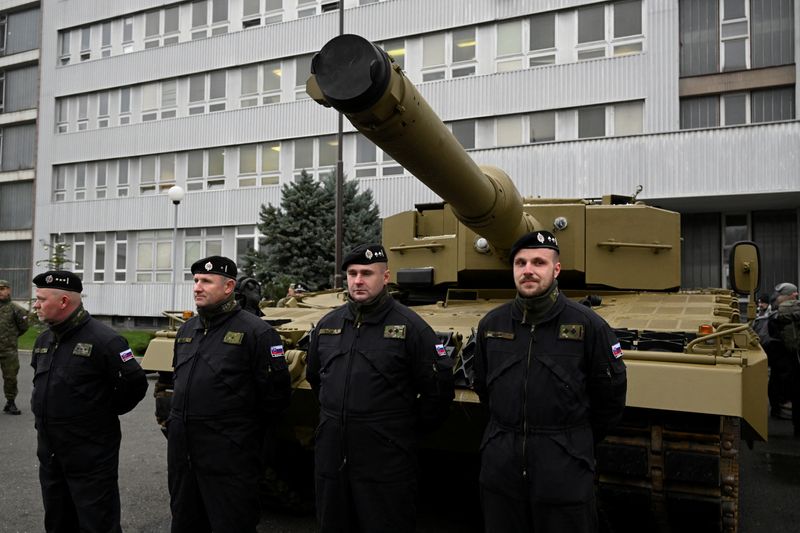 © Reuters. FILE PHOTO: Members of the military stand next to a tank, as Germany delivers its first Leopard tanks to Slovakia as part of a deal after Slovakia donated fighting vehicles to Ukraine, in Bratislava, Slovakia, December 19, 2022. REUTERS/Radovan Stoklasa

(Reuters) – Germany has agreed to send its Leopard 2 tank to Ukraine and allowed other countries using the German-built tank to re-export them, responding to months of pleading from Kyiv for extra firepower to break through Russian defensive lines.

Kyiv has been pushing for the Leopard 2 tank in particular because it has several advantages over the alternatives, such as Britain’s Challenger 2 and the U.S. M1 Abrams tanks.

WHY DOES UKRAINE WANT THE LEOPARD 2?

One advantage of the Leopard 2 tank is that, as well as being one of the best tanks in the West’s arsenal, it is also one of the most widely used.

With some 20 nations operating the Leopard 2, several nations could each chip in a small portion of their tanks to support Ukraine. Operating a large number of one model would make it easier for Ukraine to train crew and manage maintenance.

The tank, produced jointly by German firms Krauss-Maffei Wegmann and Rheinmetall, weighs more than 60 tonnes, has a 120 mm smooth bore gun and can hit targets at a distance of up to five km (3.1 miles).

HOW MANY LEOPARD 2 TANKS ARE AVAILABLE?

Although the Leopard 2 tank is widely used, tanks and other heavy weapons are in scarce supply in most of the West because many countries drastically reduced the size of their militaries after the collapse of the Soviet Union.

Germany has about 350 Leopard 2 tanks today, compared to some 4,000 battle main tanks at the height of the Cold War, according to German military expert Carl Schulze.

At the same time, it is all but impossible to buy a large amount of Leopard 2 tanks quickly.

Germany’s defence industry is banned by law from producing them for stock-keeping. Typically, countries ordering new tanks need to be prepared to wait two to three years for delivery.

Even if production were ramped up, experts say it could take at least two years for the first new tanks to leave the factory.

WHAT ALTERNATIVE TANKS ARE THERE?