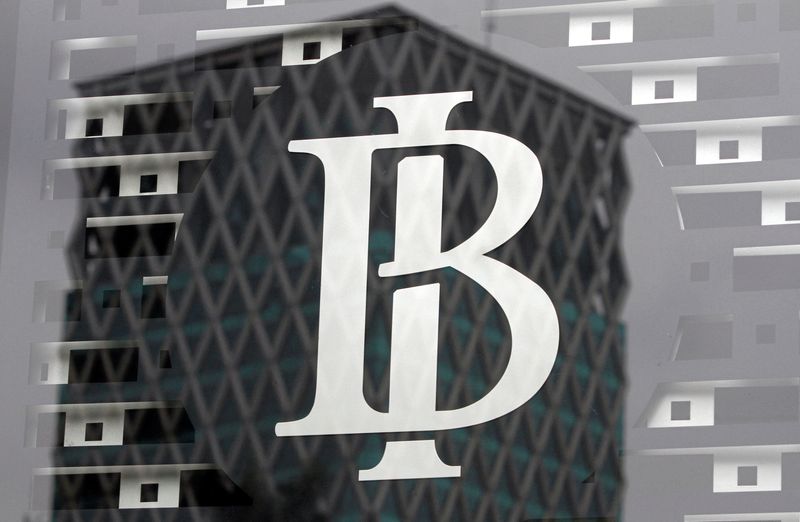 © Reuters. FILE PHOTO: The logo of Indonesia’s central bank, Bank Indonesia, is seen on a window in the bank’s lobby in Jakarta, Indonesia September 22, 2016.REUTERS/Iqro Rinaldi

Parliament in December passed into law a bill that widened BI’s remit to include maintaining financial system stability to support sustainable economic growth, on top of its existing goal of keeping the rupiah currency stable, which includes curbing inflation.

There have been concerns that the new law may disrupt BI’s autonomy, although government officials have repeatedly pledged the central bank would remain independent.

“We have been doing this all along. Now we are grateful the new law acknowledge(s) that legally,” Warjiyo said, referring to efforts to maintain financial and payment system stability through macroprudential and digital payment policies.

“We still do the inflation targeting framework,” he said.

Warjiyo made the comments, some of his first in public on BI’s wider mandate, at the bank’s annual investment forum.

BI’s decision-making on its policy mix would continue to take into account many aspects, including economic growth, something the central bank has done since 2010, Warjiyo added.

Before the passage of the law, BI typically set an inflation target range for each year and decided on a mix of policy to hit the target, while maintaining financial system stability.

BI has raised its benchmark interest rate by a total of 225 basis points since August to curb inflation that has been running above its target range.

Warjiyo repeated that barring any unforeseen circumstances, the rate hikes were sufficient to guide inflation back to within the 2% to 4% target range in the second half of 2023. The December inflation rate was 5.51%.