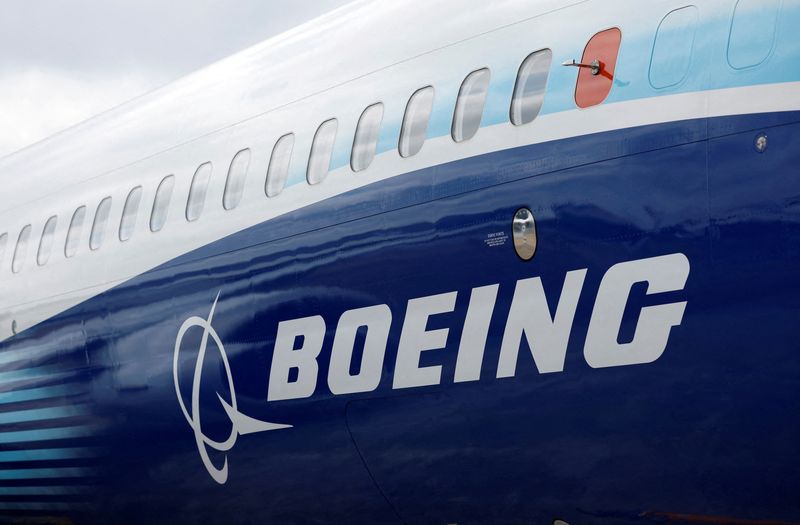 © Reuters. FILE PHOTO: The Boeing logo is seen on the side of a Boeing 737 MAX at the Farnborough International Airshow, in Farnborough, Britain, July 20, 2022. REUTERS/Peter Cziborra

U.S. District Judge Reed O’Connor last week ordered Boeing to appear in court on Thursday in Fort Worth, Texas, to be arraigned on a felony charge after families of those killed in the 2018 and 2019 crashes objected to a $2.5 billion Justice Department agreement to resolve a 737 MAX fraud conspiracy charge related to the plane’s flawed design.

The crashes in Indonesia and Ethiopia, which cost Boeing more than $20 billion, led to a 20-month grounding for the best-selling plane and prompted lawmakers to pass sweeping legislation reforming airplane certification.

The families want O’Connor to name an independent monitor to oversee Boeing’s compliance; impose a standard condition that Boeing commit no new crimes; and disclose publicly as much as possible of the substance of Boeing’s corporate compliance efforts adopted since 2021.

“Only an independent monitor — the proverbial second set of eyes — can begin to restore confidence in Boeing and ensure safety of the community,” the families said.

Boeing did not immediately comment but Chief Executive Dave Calhoun told CNBC Wednesday the planemaker did not object to the arraignment and expressed sympathy for the families. He said their veiws were “a good reminder.. of how important safety is for all of us.”

The planemaker is expected to enter a not guilty plea on Thursday as is standard in deferred prosecution cases. The Justice Department in 2021 agreed to seek dismissal of the charge after the three-year agreement if Boeing complies with all terms.

More than a dozen relatives of people killed plan to speak at the arraignment Thursday. The relatives said in the filing Boeing had “committed the deadliest corporate crime in U.S. history.”

Both Boeing and the Justice Department oppose reopening the deferred prosecution agreement, which included $500 million in victim compensation, a $243.6 million fine and $1.7 billion in compensation to airlines.