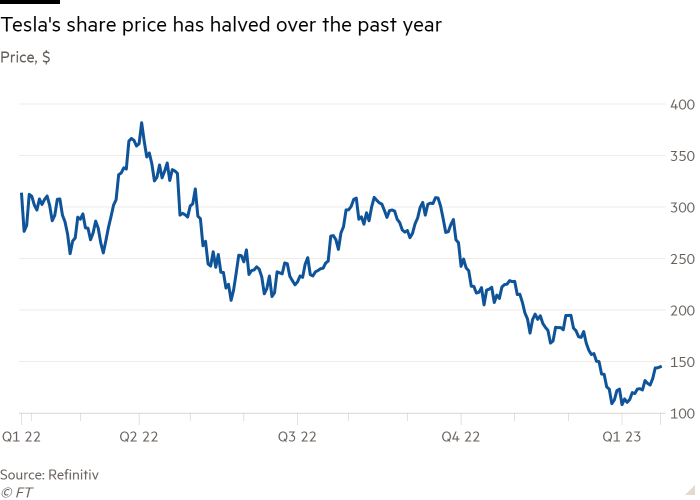 Wall Street stocks pared losses on Wednesday as investors assessed the latest batch of corporate results and looked ahead to a crucial set of US gross domestic product figures out later in the week.

The blue-chip S&P 500 closed fractionally lower, having recouped morning declines to briefly turn positive late in afternoon trading. The tech-heavy Nasdaq Composite slipped 0.2 per cent, eating into gains registered earlier this week. Both indices were down more than 1 per cent earlier in the session.

The moves in equity markets came after Microsoft on Tuesday projected revenue would hit between $50.5bn and $51.5bn in the current quarter, below analysts’ expectations. Its shares shed 3 per cent in early Wednesday trading before paring back most of its losses to be 0.6 per cent lower. Other members of the “Faang” tech group such as Amazon and Alphabet also trimmed their early declines, helping a recovery in the broader stock market indices.

Tesla reports its fourth-quarter figures later on Wednesday, with analysts polled by Refinitiv expecting earnings of $1.01 a share on revenue of $24.03bn, up from earnings of 68 cents a share on revenue of $17.72bn during the same period in 2021. The carmaker’s shares have jumped a third in 2023 but have more than halved in value over the past 12 months. Its shares gained 0.4 per cent on Wednesday.

Other companies have enjoyed a January bounce. An easing of US inflation data, “in conjunction with signs of cooling in labour and wages, is coming in ahead of schedule”, boosting hopes that the Federal Reserve would pause its interest rate rises earlier than expected, said Charlie McElligott, analyst at Nomura.

China’s reopening and Europe’s expected avoidance of a deep recession have driven a “re-rating higher in global growth at the same time”, he added. The Nasdaq Composite tumbled by a third in 2022 but is up more than 7.5 per cent this year.

Some traders doubt how long this year’s rally has left to run. Mike Zigmont, head of trading and research at Harvest Volatility Management, said: “Earnings season has been unremarkable so far and the last few sessions of strength suggest that investors are either speculating that the season will become good in short order or that when the Fed hikes [0.25 percentage points] next Wednesday, earnings season won’t matter because there will be a wave of optimism and positivity as the hiking cycle concludes.”

He added: “That’s a lot of gamesmanship if you…