Morgan Stanley Reiterates View of No Hike in March, 'ample room for the data to shift Fed views' 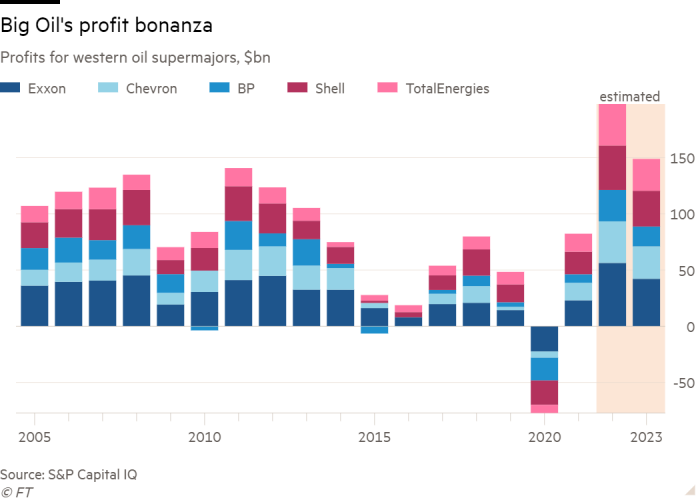 Oil companies will defy the gloom overshadowing many other industries when they start to report earnings this week, with analysts forecasting tens of billions of dollars in fourth-quarter profits.

But the outlook is dimmer for the coming year: early projections compiled by S&P Capital IQ have the five western oil supermajors collectively earning $150bn in 2023, down from an estimated $200bn haul in 2022.

The deceleration in oil producers’ cash machine comes after energy prices pulled back from highs reached last year after Russia’s full-scale invasion of Ukraine. But even with a $50bn decline in annual profits, the companies would still rake in their second-highest earnings ever recorded.

The US major Chevron kicks off Big Oil’s earnings season on Friday, followed by ExxonMobil next Tuesday and Europe-based Shell, BP and TotalEnergies in early February.

The five companies’ combined profits for the last three months of 2022 are forecast to be $41.8bn, up more than 40 per cent from $29.4bn a year before, according to S&P Capital IQ.

Their earnings are expected to be down 18 per cent from the third quarter, however. Exxon flagged in a regulatory filing this month that lower commodity prices would reduce fourth-quarter earnings by as much as $4.1bn from its record-smashing $19.7bn in the third quarter. The warning still puts Exxon on track for one of its most profitable quarters on record.

Sajjad Alam, an analyst at Moody’s, said last year’s huge cash influx had put the sector “in the best place I have seen in the last 15 years. They will have a lot of flexibility in terms of how they want to use record levels of cash flow.”

Reflecting this strength, Chevron on Wednesday announced it will repurchase $75bn of shares over an unspecified number of years.

Governments’ increased focus on energy security after the Ukraine invasion has brought back some of the investors who shunned fossil fuel producers over climate-damaging emissions, analysts say.

The market’s “peak ESG concerns have been fading”, said Matt Portillo, an analyst at Texas-based investment bank TPH, referring to environmental, social and governance investing. As investors shifted focus back to the companies’ core oil and gas businesses, it has been “constructive for the equities,” Portillo said.

Oil and gas stocks led the Wall Street benchmark S&P 500 last year for the second year in a row, rising around 40 per cent compared with the broad index’s 14 per cent…