Franklin Templeton: an old-school stockpicker tries to reinvent itself 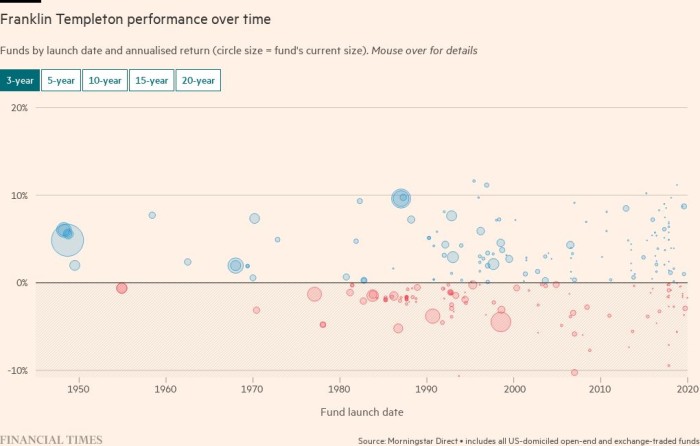 Jenny Johnson was at the movies with her kids when her phone rang. She stepped into a theatre lobby smelling like popcorn to answer the $4.5bn call.

“What’s your final number,” said Nelson Peltz. The activist investor had a 10 per cent stake in Legg Mason, the asset manager that Johnson’s family firm Franklin Templeton was trying to acquire, and Peltz was pushing for a higher price.

But the Johnsons were prepared to walk away. “He needed to know that we were done,” Johnson says. She told Peltz to take their final offer to the board and went back into the movie. Legg Mason accepted the deal terms.

The $6.5bn acquisition, including Legg Mason’s $2bn of debt, was the biggest deal in Franklin’s 75-year history and remains one of the largest in the industry’s history.

The company announced the all-cash deal in February 2020, shortly before the Covid-19 pandemic shut down swaths of the global economy and sent financial markets into a tailspin, and Franklin was accused by some of paying too much.

But Johnson, who had only just succeeded her elder brother Greg to become Franklin’s first female chief executive, is unrepentant. “We never looked back,” she says of the most high-profile component of a plan to stem outflows and reposition the company for a world increasingly dominated by huge managers peddling index-tracking products.

By the time of the Legg Mason deal, Franklin risked being overrun by seismic changes in its industry. Amid the wave of money going into low-cost index products and computer-driven trading strategies, the family-owned company specialised in offering more expensive funds run by managers who pick stocks and bonds.

However, conditions in markets have now started to shift. After more than a decade when bond-buying by the Federal Reserve and other central banks lifted all boats, rising rates are leading to more volatility, which could provide fruitful opportunities for active management. Some see it as a last chance for many stockpicking funds to prove their worth.