The end of Chinese lockdowns and the reopening of trade 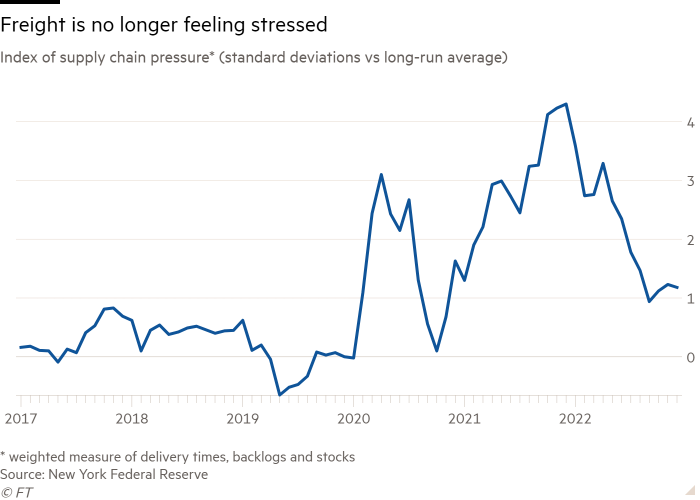 Beijing’s rapid dismantling of its Covid lockdowns — whose impact will become clear after the Chinese new year break, when the Tiger has handed over to the Rabbit — will undoubtedly be one of the economic events of 2023.

Predicting the impact on world growth involves sorting through a tangle of contradictory effects. On the positive side, a surge in consumption will boost export demand elsewhere. On the negative, higher Chinese industrial production means more demand for fuel and particularly LNG, possibly reinflating the energy cost shock. In any case, if the reopening creates a new surge of cases and a healthcare crisis, it could be a drag rather than a boost to growth.

The impact on globalisation and particularly the goods trading system is similarly unclear. The immediate thought is a positive one. Reopening could help unclog Chinese shipping and trucking routes, reducing strains in value chains. But the transition could be choppy, to say the least. Ports and factories are subject to the same reopening risks as for overall growth. Infected workers staying home won’t keep container terminals open, and in any case ports, which are capital rather than labour intensive, have been running relatively smoothly compared to much of the domestic economy.

From the domestic demand side, China may run a big trade surplus but it is no longer just an export machine: with imports of $2.7tn in 2021 against the US’s $2.8tn, it’s the world’s second biggest goods importer. On the plus side, a big rise in consumption might add to global demand. On the downside, more container traffic could see a re-emergence of the strains in supply chains that started in 2020.

The reopening comes at a time when that congestion is rapidly dissipating but not for the reasons anyone would want. Stratospheric freight rates and wait times for cargo ships collapsed in the first half of last year not because of higher efficiency in ports and shipping but because prospects for global growth and hence cargo traffic rapidly weakened.

As it happens, China’s limited reopenings actually managed to worsen stress on supply chains last year because of increased infection rates among workers, but not by much. Economists at the New York Federal Reserve have created a composite index of supply chain pressure including delivery times and stocks of goods. Plummeting freight volumes meant the metric fell rapidly last year from a peak of 4.3 standard deviations above the historical…