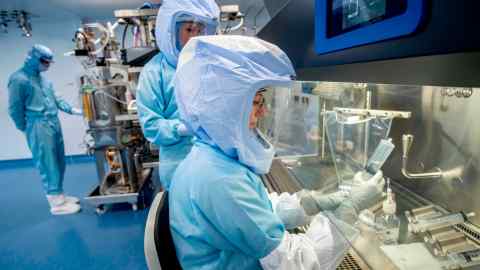 Britain faces a severe shortage of doctors who work both in the NHS and at universities, which threatens medical research and teaching, the Lords science and technology committee has warned the government.

The peers sent the findings of their inquiry into academic medicine to Steve Barclay, the health secretary, on Thursday, warning that “the clinical research environment in the NHS is on a dangerous precipice”.

Baroness Julia Brown, the committee chair, told the Financial Times that the growing shortage of clinical academics was a neglected part of the overall crisis engulfing the health service.

“The foundations [of university medicine] are starting to be eroded,” she said. “The pipeline for clinical academics is really looking quite frightening . . . and it is not being talked about.”

UK universities employ 1,060 clinical teaching and research staff over the age of 55, “many of whom are thinking of retiring early”, the Lords inquiry found.

It added that there was a shortage of potential successors coming through in younger age groups. The number in the 35 to 45-year-old cohort is about 750 and not all of them will maintain clinical academic careers.

At the heart of the problem is a financial disincentive to become a clinical academic rather than focus solely on an NHS career, the Lords said. The postgraduate research training required for academic posts, on top of the initial medical qualification, involves a significant loss of income.

“There is a substantial opportunity cost for continuing to pursue a research career alongside medical consultancy training, as clinical academics qualify as full consultants and start being promoted on the pay scale later in life,” the committee found.

“This can contribute to a leaky pipeline for clinical academics in their early 30s, particularly women and those from economically disadvantaged backgrounds, for whom the security of a full-time job as a consultant may be more necessary.”

While a longstanding issue, its effects will be felt more strongly in the near future, the Lords said, unless ministers work urgently with universities, research funders and NHS trusts “to ensure that clinical academics are not financially disadvantaged by pursuing research compared to the earning potential of full-time clinicians”.

Government plans for training more doctors depend on solving the problem, as well as its “science superpower” ambitions, Brown…